The wonder of God’s words

Although many have studied the Bible, not all have come to the knowledge or understanding of the truth.

INDISPUTABLY THE BEST seller of all time, the Bible is the most read and most studied book in all history. It is said to have been translated, in parts and in whole, into more than 2,000 languages (Guinness World Records 2002, p. 154). With that awesome circulation, the Bible is one book that has undoubtedly affected and influenced so many lives, cultures, countries, and peoples throughout this habitable planet. And its readers, including the so-called Bible students, have viewed and regarded it in so many different ways: as a history book, as a book of customs and morals, as a mere literature of the Hebrew people, and as an “open book.” The last of which should be seriously addressed. However, to those who believe and value the Bible, this is no ordinary book. The Bible is the repository of God’s words. As such, there is more to the Bible as a book than meets the eye, and on this regard our Lord Jesus Christ enlightens us:

“…‘To you it has been given to know the mystery of the kingdom of God; but to those who are outside, all things come in parables, so that “Seeing they may see and not perceive, And hearing they may hear and not understand; Lest they should turn, And their sins be forgiven them’.” (Mark 4:11-12 New King James Version)

“Now to Him who is able to establish you according to my gospel and the preaching of Jesus Christ, according to the revelation of the mystery kept secret since the world began.” (Rom. 16:25 NKJV)

“Always learning and never able to come to the knowledge of the truth.” (II Tim. 3:7 NKJV)

Such is the wonder of the words of God. Although many have studied the Bible, not all have come to the knowledge or understanding of the truth, as proven by their conflicting interpretations regarding what is written therein. It goes to show that the Bible is not an “open book” as many want to believe. Not just anyone who knows how to read can understand it. And neither can such understanding be gained through diligent study alone. What would happen if those who have not been given understanding dare to preach the gospel? Apostle Paul provides us the answer:

“I marvel that you are turning away so soon from Him who called you in the grace of Christ, to a different gospel, which is not another; but there are some who trouble you and want to pervert the gospel of Christ.” (Gal. 1:6-7 NKJV)

Inasmuch as the preaching of those who do not truly understand God’s words results in a different gospel or perverted gospel, Apostle Peter forewarned the danger awaiting those who listen to and believe in such false preachers:

“This is what he says in all his letters when he writes on the subject. There are some difficult things in his letters which ignorant and unstable people explain falsely, as they do with other passages of the Scriptures. So they bring on their own destruction.” (II Pet. 3:16 Good News Bible)

Thus, we should not believe a preacher simply because he uses the Bible. If he does not have the gift of understanding of God’s words, then he would only succeed in endangering the souls of his listeners. 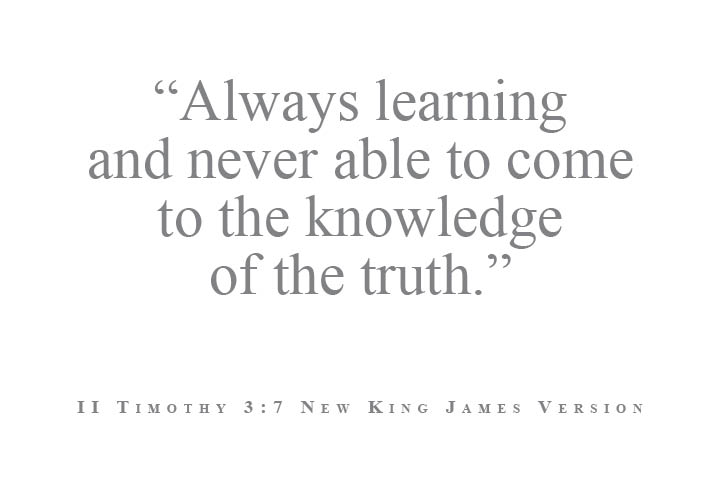 The preaching of Christ
There is no doubt that Christ, being the greatest of God’s messengers, was given the understanding to know the mystery of God’s words. No wonder His preaching elicited awe from His listeners:

“The Jewish authorities were greatly surprised and said, ‘How does this man know so much when he has never been to school?’” (John 7:15 GNB)

The Jews marveled how Christ came to know so much when they said He had never been to school. Such was again displayed in His encounter with the Sadducees:

“When they had heard these words, they marveled, and left Him and went their way. The same day the Sadducees, who say there is no resurrection, came to Him and asked Him, saying: ‘Teacher, Moses said that if a man dies, having no children, his brother shall marry his wife and raise up offspring for his brother. Now there were with us seven brothers. The first died after he had married, and having no offspring, left his wife to his brother. Likewise the second also, and the third, even to the seventh. Last of all the woman died also. Therefore, in the resurrection, whose wife of the seven will she be? For they all had her.’ Jesus answered and said to them, ‘You are mistaken, not knowing the Scriptures nor the power of God. For in the resurrection they neither marry nor are given in marriage, but are like angels of God in heaven. But concerning the resurrection of the dead, have you not read what was spoken to you by God, saying, ‘I am the God of Abraham, the God of Isaac, and the God of Jacob”? God is not the God of the dead, but of the living’.” (Matt. 22:22-32 NKJV)

The Sadducees thought that they could ensnare our Lord Jesus Christ through their questions but they were instead silenced by the wisdom of the Savior. The Pharisees also tried the same thing to test the Lord Jesus Christ, but only to no avail. This account was written by Matthew:

Christ was able to answer clearly the question posed to Him by the Pharisees. And to show them how ignorant they were concerning God’s words, He in turn asked them a question which they could not answer. Matthew narrated further:

“While the Pharisees were gathered together, Jesus asked them, saying, ‘What do you think about the Christ? Whose Son is He?’ They said to Him, ‘The Son of David.’ He said to them, ‘How then does David in the Spirit call Him “Lord,” saying: “The LORD said to my Lord, ‘Sit at My right hand, Till I make Your enemies Your footstool?’” If David then calls Him “Lord,” how is He his Son?’ And no one was able to answer Him a word, nor from that day on did anyone dare question Him anymore.” (Matt. 22:41-46 NKJV) 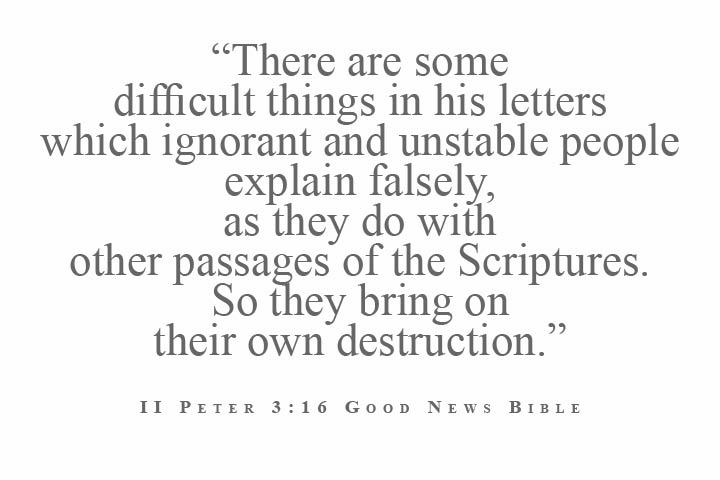 The preaching of the Apostles
When our Lord Jesus Christ ascended to heaven, His apostles took the cudgels of preaching the gospel to the people. Their preaching was also awe-inspiring in spite of the fact that they were perceived as unlettered. The book of Acts recorded this account:

“Now when they saw the boldness of Peter and John, and perceived that they were uneducated and untrained men, they marveled. And they realized that they had been with Jesus.” (Acts 4:13 NKJV)

The reason God chose many who are uneducated and unlettered as His servants, especially as instruments in preaching His words, is clarified by Apostle Paul thus:

“Brothers, think of what you were when you were called. Not many of you were wise by human standards; not many were influential; not many were of noble birth. But God chose the foolish things of the world to shame the wise; God chose the weak things of the world to shame the strong. He chose the lowly things of this world and the despised things—and the things that are not—to nullify the things that are, so that no one may boast before him.” (I Cor. 1:26-29 New International Version)

Clearly, God had intended it to be so that no one might boast before Him. And although there were some who were educated like Apostle Paul, they didn’t use their own wisdom in convincing people to believe in their preaching:

“My message and my preaching were not with wise and persuasive words, but with a demonstration of the Spirit’s power, so that your faith might not rest on men’s wisdom, but on God’s power.” (I Cor. 2:4-5 NIV)

Sent and anointed by God

Christ and His apostles clearly understood God’s words and were able to preach them to the people because they were sent by God. They had the spirit of God in them. Says our Lord Jesus concerning His authority to preach:

“‘The Spirit of the LORD is upon Me, Because He has anointed Me To preach the gospel to the poor; He has sent Me to heal the brokenhearted, To proclaim liberty to the captives And recovery of sight to the blind, To set at liberty those who are oppressed.” (Luke 4:18 NKJV)

The same can be said of His apostles, as Christ, before He ascended into heaven, promised to send them the Holy Spirit, who would teach and guide them in their preaching:

“The Helper, the Holy Spirit, whom the Father will send in my name, will teach you everything and make you remember all that I have told you.” (John 14:26 GNB)

And this is also true to the messenger in these last days whom God commissioned to preach to us His words. The Bible prophesied the sending of the messenger from the rising of the sun who has the seal of God:

“And I saw another messenger going up from the rising of the sun, having a seal of the living God, and he did cry with a great voice to the four messengers, to whom it was given to injure the land and the sea, saying, ‘Do not injure the land, nor the sea, nor the trees, till we may seal the servants of our God upon their foreheads’.” (Rev. 7:2-3 Young’s Literal Translation) 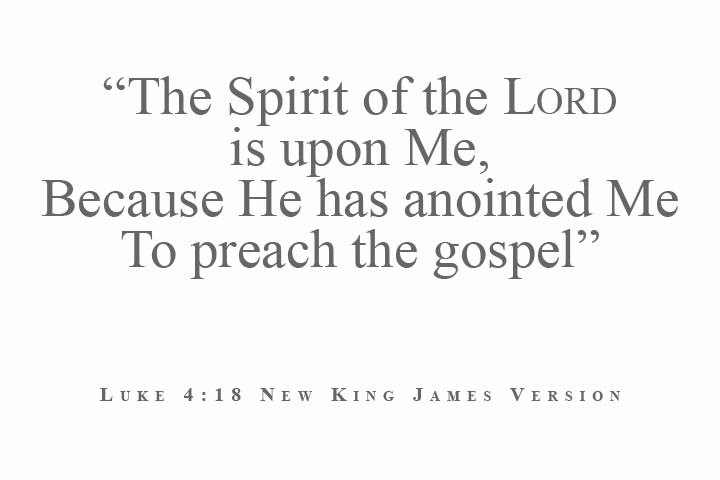 The work of the prophesied messenger was to seal the servants of God. In carrying out the mission of sealing God’s servants, he was not alone—he has co-workers. It says in the prophecy, “till we may seal the servants of our God” (emphasis ours). The Church Of Christ believes that this prophecy was fulfilled in Brother Felix Y. Manalo and the ministers in the Church Of Christ. The seal is the Holy Spirit, and sealing is done by means of preaching the gospel as explained by the Apostle Paul, thus:

“And you also were included in Christ when you heard the word of truth, the gospel of your salvation. Having believed, you were marked in him with a seal, the promised Holy Spirit, who is a deposit guaranteeing our inheritance until the redemption of those who are God’s possession—to the praise of his glory.” (Eph. 1:13-14 NIV)

Inasmuch as the messenger in these last days was given the gift of the Holy Spirit, he was able to understand and to preach to the people the gospel of salvation. The members of the Church Of Christ, being the fruits of his preaching, are certain that what has been taught to them are the words of God that will lead them to salvation. As it is, only God’s messengers can preach the pure gospel which is hidden in mystery. As the Apostle Paul asked rhetorically, “And how shall they preach unless they are sent?” (Rom. 10:15 NKJV).

Hence, any church or religious group that does not believe in the commissioning of God’s messenger has certainly not come to the knowledge of truth. And if there are those who would claim to have been taught by a messenger of God, but fail to show biblical proof of God’s commissioning, they would only end up to perdition, for they have not understood the wonder of God’s words written in the Bible.

This article was originally published in the Pasugo: God’s Message magazine, June 2013 Issue.