The true Church established by Christ

Is there any particular church which is of Christ?

WITH THE PROLIFERATION of Christian-professing churches and religious movements, people may find it quite difficult and confusing to determine which is the one that is truly of our Lord Jesus Christ. Of course, most, if not all, of those churches would claim to be so, yet, do these claimants truly belong to Christ? Is there any particular church which is of Christ?

Let’s find out, in light of the teachings of the Bible, which Church people should join and become members of, for it is the true one that belongs to Christ.

“I will build my church”

“… And on this rock I will build My church, and the gates of Hades shall not prevail against it.” (New King James Version)

Indeed, Christ established a Church. Note that Christ said, “I will build my church”—He did not say “my churches.” Christ’s statement should eradicate once and for all the wrong notion that all churches belong to Him. It is clear that He built only one Church upon Himself, as He is the rock or chief cornerstone placed by God (Eph. 2:20-22; Acts 4:11).

This Church founded by Christ was aptly called by the apostles after its founder and owner: Church Of Christ (Acts 20:28 Lamsa Translation). Therefore, the one and only Church that truly belongs to Christ is the Church that He Himself established and was called after His name—the Church Of Christ.

The Church Of Christ comprises three groups of people

In Acts 2:39, Apostle Peter underscored that there are three groups of people who were promised to receive the Holy Spirit:

“For the promise is to you and to your children, and to all who are afar off, as many as the Lord our God will call.” (NKJV)

The first two groups whom Apostle Peter referred to as “to you” and “to your children” were the Jews and the Gentiles, respectively, who were called into the Church Of Christ during the time of Christ and of the apostles (Acts 2:36; Rom. 9:24; I Cor. 4:15). Whereas the third group, which was not yet called by God during that time, would come from “afar off.” They were far not only in place but also in time (Acts 2:39 Rieu Translation). 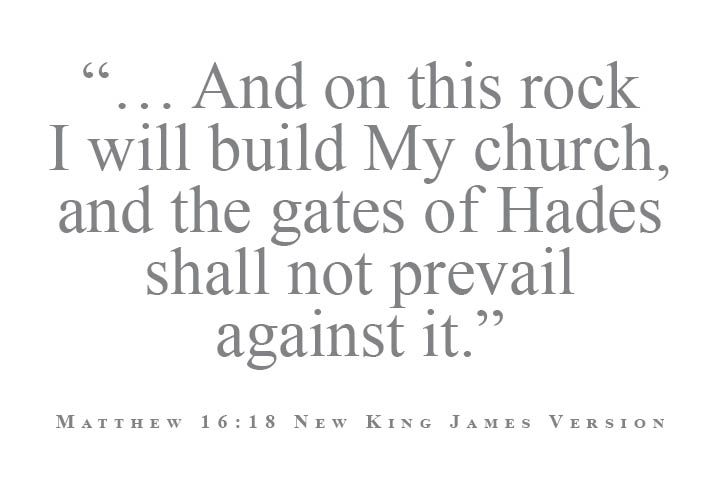 The “other sheep” of Christ

How does our Lord Jesus Christ recognize this third group of people prophesied by the apostles? In John 10:16, Christ declared this prophecy:

“I have other sheep too. They are not in this flock here. I must lead them also. They will listen to my voice. In the future there will be one flock and one shepherd” (Easy-to-Read Version)

Christ prophesied about His “other sheep” who “in the future … will be one flock.” Christ is not referring to literal sheep but to the members of His fold or flock, which is the Church Of Christ:

Hence, when Christ said “I have other sheep” and they “will be one flock,” it means that there would be people who would become members of the Church Of Christ far ahead “in the future” or distant times.  They are the third group of people who are “afar off” both in place and in time as prophesied by the apostles.

What is that far or distant place and time being referred to?

The prophesied place and time

In a related prophecy, Isaiah 43:5-6, God has foretold the calling of His children from a far place and at the time referred to as the ends of the earth:

“Fear not: for I am with thee: I will bring thy seed from the east, and gather thee from the west; I will say to the north, Give up; and to the south, Keep not back: bring my sons from far, and my daughters from the ends of the earth.” (King James Version)

The distant place, therefore, mentioned in the prophecy of the apostles refers to the “far” place from where God would bring or call His sons and daughters. This is the “far east”:

“From the far east will I bring your offspring, and from the far west I will gather you.” (Isa. 43:5 Moffatt Translation)

“And you will hear of wars and rumors of wars. See that you are not troubled; for all these things must come to pass, but the end is not yet. For nation will rise against nation, and kingdom against kingdom. And there will be famines, pestilences, and earthquakes in various places. All these are the beginning of sorrows.” (Matt. 24:6-8 NKJV)

Foremost among the events that would herald the Second Advent of Christ is a war that would be rumored and would involve nations and kingdoms. The Iglesia Ni Cristo has long held and stands its ground that the fulfillment of this is the First World War. And even certain Bible scholars now agree to this:

“Wars between nations, or even between kingdoms, is and has been a common occurrence. History has recorded famines at various times. There have been times of great disease epidemics. There have been earthquakes in the past, but increasingly so in this present day. Jesus tells His disciples, however, to be awaiting a specific time during which all of these phenomena would be in evidence at the same time. The first such time in world history occurred during the years of World War I (1914… ).” (footnote, Matt. 24:6-8 Last Days Bible)

Thus, the start of World War I indicates the beginning of the time “ends of the earth”—the prophesied time when the third group of people or the other sheep of Christ would become one flock or Church Of Christ in the place prophesied as the Far East. 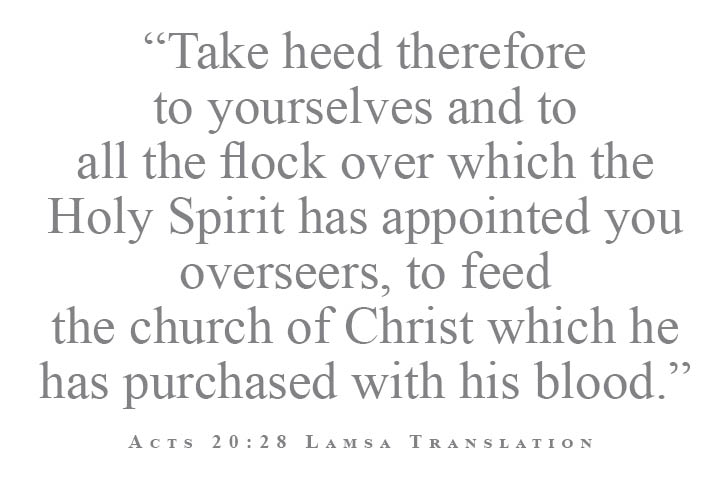 The fulfillment of the prophecy

“The Philippines … is the only Christian nation in the Far East.” (International Security and the United States: An Encyclopedia, Vol. II, p. 614)

Therefore, the last and third group of people, which composes the true Church established by Christ, are the members of the Church Of Christ or Iglesia Ni Cristo that began in the Philippines in 1914. Now after 107 years from its inception, transcending cultural barriers the Church Of Christ has already reached 158 countries and territories and continues to grow by leap and bounds. “Like a raging flood tide driven by the breath of the Lord” (Isa. 59:19 New Living Translation) His work of salvation in these last days cannot be hampered for God Himself declared, “I work and who can hinder it?” (Isa. 43:13 Revised Standard Version)

Christ did not have to descend from heaven for Him to be heard by His other sheep in 1914. In Luke 10:16 (NKJV), He said that “He who hears you hears Me”—referring to the those whom Christ and God sent (John 13:20). Therefore, through the preaching of the true messenger sent by God, Christ’s other sheep were able to listen to and follow Him and become one flock or Church Of Christ.

The Iglesia Ni Cristo firmly believes that Brother Felix Y. Manalo is the fulfillment of the one sent and prophesied by God to bring people to the true Church Of Christ in these last days or end times (Isa. 41:9-10; 46:11-13; Rev. 7:2-3). Through his preaching, the members of the Church Of Christ in the last days heard what Christ wants them to do, which they did. One of these is what Christ commanded people to do to be saved:

As the door of the sheepfold, Christ commands anyone who wants to be saved to enter the fold. As already proven, the sheepfold or flock Christ referred to is the Church Of Christ (Acts 20:28 Lamsa). 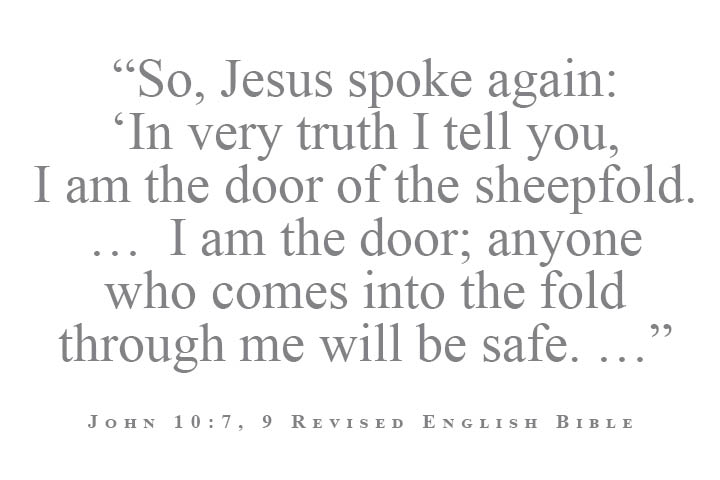 Believe before it’s too late

Regarding entering or joining His Church through Him as the door, Christ commanded in Luke 13:24:

“Strive to enter by the narrow door [force yourselves through it], for many, I tell you, will try to enter and will not be able.” (Amplified Bible)

In one of the parables of Christ, He made it clear that only His sheep will inherit the kingdom of heaven:

“When the Son of Man comes in His glory, and all the holy angels with Him, then He will sit on the throne of His glory. All the nations will be gathered before Him, and He will separate them one from another, as a shepherd divides his sheep from the goats. And He will set the sheep on His right hand, but the goats on the left. Then the King will say to those on His right hand, ‘Come, you blessed of My Father, inherit the kingdom prepared for you from the foundation of the world: … Then He will also say to those on the left hand, ‘Depart from Me, you cursed, into the everlasting fire prepared for the devil and his angels:” (Matt. 25:31-34, 41 NKJV)

If we truly believe in Christ and yearn to enjoy the eternal life in the Kingdom of Heaven, then we must make a firm decision to become His sheep and be part of His flock by joining the Church Of Christ, for He said:

“But you don’t believe me because you are not part of my flock. My sheep recognize my voice, and I know them, and they follow me. I give them eternal life and they shall never perish. No one shall snatch them away from me.” (John 10:26-28 The Living Bible)