Onward to the promised land

One must look to the future with hope and faith for a “better home in heaven” where he will receive God’s eternal rewards.

By ROLAND A. AGUIRRE

YOU CAN CALL it terra firma, ground, earth, or land. Occupying almost a quarter of the globe, it is one of life’s most coveted possessions. But it does not come cheap. In fact, the quest for land ownership has spawned conflicts and turmoil that run the gamut from petty disputes to bloody wars: it is the cause of animosity between squatters and landowners, tenants and landlords, and of border disputes and territorial conflicts between countries like Saudi Arabia and Yemen, Ethiopia and Eritrea, Great Britain and Argentina, among others. The centuries-old conflict between the Jews and the Palestinians has been very deeply rooted in it. Likewise, it is one of the reasons the hostility between India and Pakistan might cross the nuclear threshold and endanger planet Earth.

Indeed, it is a great irony that something so ubiquitous and abundant is beyond the possession of many and continues to severely affect the relationships among peoples and nations. Wars have been waged, conflicts have intensified, and relationships have been severed—all because of land. And yet, despite all these problems, the quest and longing for it remain unquenched.

The land of Canaan

The first nation of God, Israel, was promised a land described in the Bible as “a land flowing with milk and honey” (Exod. 3:8 New King James Version). The land of Canaan was often referred to as the promised land because of God’s repeated promise to give the land to Abraham and his descendants:

“Also I give to you and your descendants after you the land in which you are a stranger, all the land of Canaan, as an everlasting possession; and I will be their God.” (Gen. 17:7-8 NKJV)

There was no easy way into Canaan; it was inhabited by greater and mightier nations with armies larger and better equipped. But, because of God’s promise, Israel emerged victorious against formidable adversaries (Deut. 7:1-2; 20:1, 3-4 NKJV). And, as God’s chosen people, ancient Israel had the right to serve and glorify God because of His promises and covenant with Abraham and his descendants (Deut. 7:8-9; Ps. 105:9-10 NKJV). Moreover, not only did Israel have the true worship but also the hope of receiving His promises (Rom. 9:4 Today’s English Version).

However, the Israelites did not remain faithful to God’s covenant with them; they transgressed His law and turned away from Him:

“All Israel has transgressed your law and turned away, refusing to obey you. Therefore the curses and sworn judgments written in the Law of Moses, the servant of God, have been poured out on us, because we have sinned against you.” (Dan. 9:11 New International Version)

The Israelites’ unfaithfulness had a tragic consequence: they were rejected by God and ceased to be His chosen people (Hos. 4:6; Jer. 6:19, 30 NKJV).

From a full-pledged nation with a land of its own, the Israelite Kingdom collapsed and its people were thrown into captivity. 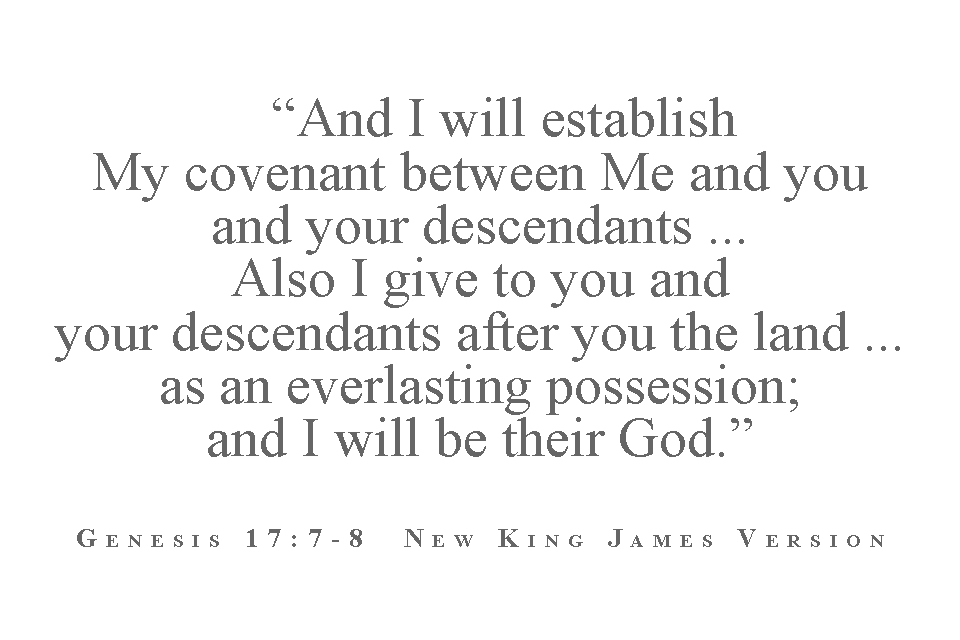 ‘Strangers and foreigners on earth’

In the Christian era, the promised land remains to be a promise, which is given by God not just to Israel in the flesh anymore. This promised land, certainly, cannot be this earth. Our present home called earth falls short of what we can consider to be a promised land offering a blissful life. Life on earth continues to deteriorate day by day as man continues to grapple with complex and unrelenting problems like dreadful diseases, natural and man-made calamities, and terrorism, among many others. The political landscape portrays a world reeling in crisis while on the economic front the outlook is downbeat and pessimistic. The prophetic words of Isaiah is foreboding:

“Then they will look toward the earth and see only distress and darkness and fearful gloom, and they will be thrust into utter darkness.” (Isa.  8:22 NIV)

Indeed, life on earth is not only fragile but also sad and frightening; the present terra firma does not offer hope. Although man’s progress has grown by leaps and bounds, he still suffers from its tragic consequences.

Where should we put our hope then? Apostle Paul wrote:

Hence, present realities, however hard and painful, should not cloud our hope for the things incorruptible and timeless—God’s promise of a better land. And so, just like the faithful servants of God in ancient times, those who hope for God’s eternal promises in the Christian era consider themselves as mere strangers and foreigners on earth because “they were looking forward to a better home in heaven.” Apostle Paul made this clear when he said:

“… But they still had faith, even though they had not received what they had been promised. They were glad just to see these things from far away, and they agreed that they were only strangers and foreigners on this earth. When people talk this way, it is clear that they are looking for a place to call their own.

“But they were looking forward to a better home in heaven. That’s why God wasn’t ashamed for them to call him their God. He even built a city for them.” (Heb. 11:13-14, 16 Contemporary English Version)

Thus, inasmuch as Canaan merely foreshadowed the Holy City and this earth we live in can never be the promised land, one must look to the future with hope and faith for a “better home in heaven” where he will receive God’s eternal rewards. 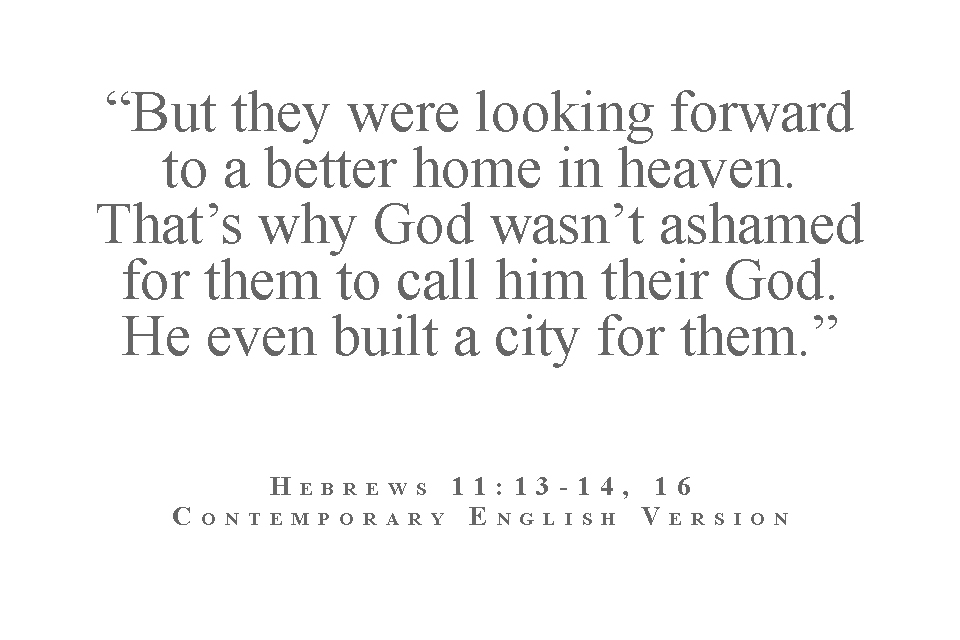 The new heaven and the new earth

This “better home in heaven,” also called the Holy City or the New Jerusalem, was described by Apostle John in a prophetic vision:

“Now I saw a new heaven and a new earth, for the first heaven and the first earth had passed away. Also there was no more sea. Then I, John, saw the holy city, New Jerusalem, coming down out of heaven from God, prepared as a bride adorned for her husband. And I heard a loud voice from heaven saying,

“Behold, the tabernacle of God is with men, and He will dwell with them, and they shall be His people. God Himself will be with them and be their God.” (Rev. 21:1-3 NKJV)

Glory abounds in “the new heaven and the new earth” for it has the glory of God (Rev. 21:11 NKJV), the kind of glory which is eternal, as Apostle Paul pointed out:

“For our light and momentary troubles are achieving for us an eternal glory that far outweighs them all.” (II Cor. 4:17 NIV)

Thus, our pains and sufferings in this world are nothing compared to the great and eternal glory that will be revealed to us in the Holy City. Again Apostle Paul elucidated:

“I consider that what we suffer at the present time cannot be compared at all with the glory that is going to be revealed to us.” (Rom. 8:18 TEV)

In the Holy City, we will enjoy a glorious life because there will be no more tears, grief, pain, death, crying, hunger and thirst (Rev. 21:1-4; 7:16 TEV). Hence, in that promised homeland, the New Jerusalem, a life of complete joy and happiness awaits us (Isa. 65:17-19 TEV). Undeniably, life there is perfect and what reigns therein is eternal peace. No warfare of any kind will ever take place there. In the New Jerusalem, conflicts over lands, borders and territories are but things of the past.

In addition, the place is unequaled in its pulchritude and unmatched in its resplendence:

“And he carried me away in the Spirit to a great and high mountain, and showed me the great city, the holy Jerusalem, descending out of heaven from God,

“Having the glory of God. Her light was like a most precious stone, like a jasper stone, clear as crystal. … The construction of its wall was of jasper; and the city was pure gold, like clear glass. … The twelve gates were twelve pearls: each individual gate was of one pearl. And the street of the city was pure gold, like transparent glass.” (Rev. 21:10-11, 18, 21 NKJV)

All kinds of precious stones adorn the foundations of the city wall. And at each of the gates are angels. There is no house of worship or temple in the Holy City because God and Christ are its temple (Rev. 21:12, 19-25 NKJV). Moreover, the river of life and the tree of life are among the precious things also found in the Holy City (Rev. 22:1-7 NKJV).

Surely, the New Jerusalem or the Holy City is worth our sacrifices and sufferings—and our waiting. 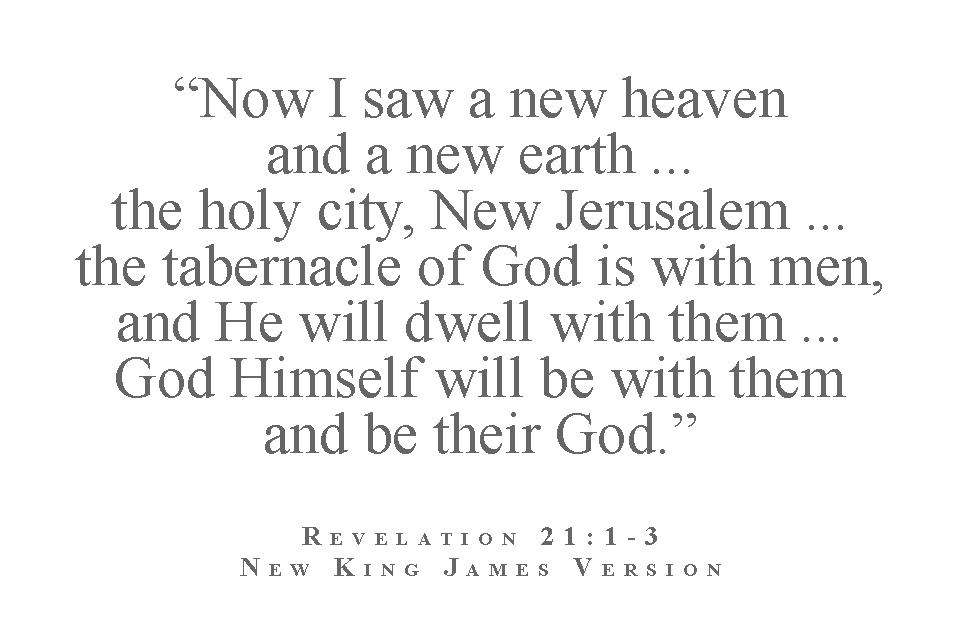 Citizens of the new promised land

But how can people in the Christian era become heirs to God’s promises and thus, enter the Holy City?

After Israel fell into apostasy, Abraham’s seed carried on with God’s covenant with Abraham. The Bible enlightens us on this regard:

“If you belong to Christ, then you are Abraham’s seed, and heirs according to the promise.” (Gal. 3:29 NIV)

Hence, in the Christian era, God’s everlasting covenant with Abraham continues because it was handed down to those who belong to Christ and thus are Abraham’s seed. One need not be an Israelite in the flesh anymore to partake of God’s covenant with Abraham. By virtue of having relationship to Christ, who is Abraham’s seed, one can have a share of God’s promises. The Bible emphasizes this:

And how can one have relationship to Christ? How can man inherit God’s promises? By becoming a part of the body. This is what the Bible teaches:

“That the Gentiles should be fellow heirs, of the same body, and partakers of His promise in Christ through the gospel.” (Eph. 3:6 NKJV)

The body referred to is the Church of Christ (Col. 1:18 NKJV; Acts 20:28 Lamsa Translation). Thus, not just anyone can be an heir to God’s promise. And through an illustration, Christ introduced the heirs to God’s promises. They are the ones who, on His second advent, are likened to sheep placed at His right, as opposed to those likened to goats at His left. The sheep of Christ will be the ones to inherit the kingdom of God (Matt. 25:31-34 TEV). The Holy Scriptures clarifies that the flock where Christ’s sheep are gathered is the Church of Christ (Acts 20:28 Lamsa).

Therefore, the members of the Church of Christ, inasmuch as they belong to Christ, are the seed of Abraham regardless of their race, color, or social status. They have the covenant that God made to Abraham, that is, the right to serve and glorify God. By virtue of this great privilege they now are heirs to God’s promises and have the right to enter the New Jerusalem or the Holy City.

As hardships, trials, and sacrifices marked Israel’s laborious journey toward Canaan, so is the journey of God’s nation in these last days toward the new promised land. Yet members of the Church of Christ are ready and willing to sacrifice even their own lives, if necessary, for the sake of this eternal blessing from God. And this they do with utmost conviction and dedication because of their firm hope that their citizenship is in heaven, as Paul in his epistle to the Philippians puts it plainly:

“For our citizenship is in heaven, from which we also eagerly wait for the Savior, the Lord Jesus Christ, Who will transform our lowly body that it may be conformed to His glorious body, according to the working by which He is able even to subdue all things to Himself.” (Phil. 3:20-21 NKJV)

This article was originally published in the Pasugo: God’s Message magazine, November 2005 issue.