How are you spending your life?

We must know what should rank first in our order of priorities lest we be spending our days in this world in vain or without hope.

TO ASK YOURSELF this question is a significant thing to do especially in these uncertain times, when the worst possible catastrophe can strike anyone, anywhere, and anytime. The more we are reminded about how fragile human life is, the more we see how important it is for us to evaluate ourselves and the way we live our momentary existence.

In a busy world where everyone and everything are moving in a very fast pace, we do ourselves a great favor by taking time off for self-reflection. We do not want to come to that point where, looking back at everything we have done, we would find our lives empty and lament these very same sad words written in the book of Job:

“My days are swifter than a weaver’s shuttle, and are spent without hope.” (Job 7:6 New King James Version)

So, have you been living your life meaningfully or are you among those who are spending their lives without hope? As we look into our hearts in search of the answers, let us take into account what the Lord God has to say as written in the Holy Scriptures.

What are your goals in life?

We may begin by examining our goals or aspirations in life, since these are what fuel one’s actions, which, in turn, determine his fate. In one of His parables, our Lord Jesus Christ spoke of a man whose success may very well remind us of the “good life” that many hardworking individuals today dream of:

“Then He spoke a parable to them, saying: ‘The ground of a certain rich man yielded plentifully. And he thought within himself, saying, “What shall I do, since I have no room to store my crops?” So he said, “I will do this: I will pull down my barns and build greater, and there I will store all my crops and my goods. And I will say to my soul, ‘Soul, I have many goods laid up for many years; take your ease; eat, drink, and be merry’.” (Luke 12:16-19 NKJV)

Here we see the triumph of a man who became so rich that he had to bring down his old barns to build new and bigger ones just to have enough room for all his possessions. Having found that he had more than enough for his future needs, he sat down and reckoned with amazement how wealthy he had become. Then, he told himself to indulge in all the pleasures that he could buy that time.

Isn’t this the kind of life that many people today want to have? Just imagine how convenient it would be to have more than enough riches to spend for a lifetime. Unfortunately, it is not where the rich man’s story ended. In the next part of the parable, we see that there’s actually more to feel sorry for than to be envious of the rich man and his inordinate wealth:

“But God said to him, ‘Fool! This night your soul will be required of you; then whose will those things be which you have provided?’ So is he who lays up treasure for himself, and is not rich toward God.” (Luke 12:20-21 NKJV)

Behind the rich man’s glory did lie a great irony. Despite all the riches he had laid up for himself, none of them was able to prevent—or prepare him for—his sudden death. What a folly it is to see that all the riches you had worked hard all your life to achieve would only be left for others to enjoy. 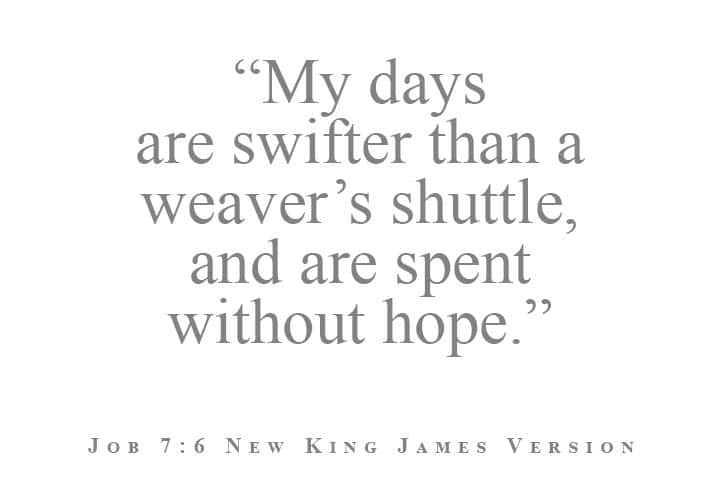 How far would you go to succeed?

There is nothing wrong with dreaming of becoming rich and with working hard to achieve such dream as long as one acknowledges rightfully his limitations and sets his priorities accordingly.

While financial success is important for man to survive in this world, it should not be his main and only concern. When one allows himself to be controlled by his ambitions for material possessions, there is always the danger of finding himself in grave misfortunes. Aren’t there people who have gone so far as to concoct evil schemes and take desperate measures to make themselves richer? In the end, the price such people have paid for the crimes they have committed have greatly outweighed whatever riches they have amassed for themselves through evil means.

And, even if there are those who manage to get away with their wicked deeds, they will still have to face the same sad reality about life’s frailty as the rich man in Christ’s parable did, for death will surely come their way. The Bible says of such people:

“Their destiny is destruction, their god is their stomach, and their glory is in their shame. Their mind is on earthly things.”
(Phil. 3:19 New International Version)

The ultimate destruction that awaits the worldly is the perdition of their souls in the fire of God’s wrath on Judgment Day (II Pet. 3:7), when everything that they have labored for and enjoyed in this world will be burned and will amount to nothing. Thus, the bottom line for those whose lives revolve solely around the pursuit of worldly riches is a hopeless and a meaningless existence, for when they die, “their hope dies with them. Confidence placed in riches comes to nothing” (Prov. 11:7 Good News Bible).

What ranks first in your order of priorities?

Clearly, then, we must know what should rank first in our order of priorities lest we be spending our days in this world in vain or without hope. What should be on top of our priority list? The Lord Jesus taught:

To many, the very first order of survival is to attend to the basic necessities of life—what to eat, what to wear, and where to live. In truth, however, these things are only of secondary importance. For, according to Jesus, foremost of all that man should seek are the kingdom of the Lord and His righteousness. 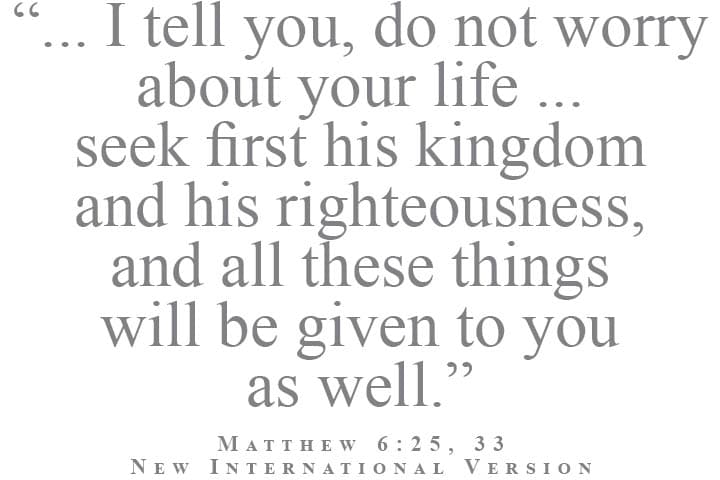 It is in the kingdom of God’s beloved Son where there is redemption and the forgiveness of sins through Christ (Col. 1:13-14). To seek the kingdom, therefore, is to seek to be redeemed by Christ. Such redemption is what we all need above anything else, for it is on account of sin that all of mankind, having sinned, are destined to suffer death and eternal punishment in the lake of fire (Rom. 3:23; 6:23; Rev. 20:14). Indeed, seeking redemption through Christ is much more important than seeking material needs, as proven further in the following biblical passage:

Those whose lives have been ransomed or redeemed by Christ through the shedding of His blood have the certainty that, when they die, God will redeem them from the grave and take them to Himself in His heavenly kingdom where they will experience eternal rest (Ps. 49:15; Rev. 21:1-4). And so, regardless of how much they earn for a living or how successful they turn out to be in this world, they are truly most fortunate—“rich toward God.” For, unlike the others who may be rich in material possessions, they who have benefited from Christ’s redemption possess a living hope:

“Let us give thanks to the God and Father of our Lord Jesus Christ! Because of his great mercy he gave us new life by raising Jesus Christ from death. This fills us with a living hope, and so we look forward to possessing the rich blessings that God keeps for his people. He keeps them for you in heaven, where they cannot decay or spoil or fade away.” (I Pet. 1:3-4 GNB)

This is the exact opposite of how many people in this world are spending their lives. A life that is filled with a living hope is what those who have been redeemed by Christ have.

Have you found what you should be looking for?

“Have you been redeemed by Christ?” “How can you be among those He redeemed?” “What is it that Christ redeemed with His blood?” These are among the questions that should guide us if we want to free ourselves from the emptiness that characterizes the lives of many people in this world. Contrary to what many have been led to believe, it is not the whole human race which was redeemed or purchased by Christ with His blood when He died on the cross; it’s the whole flock, which is the Church Of Christ:

“Take heed therefore to yourselves and to all the flock over which the Holy Spirit has appointed you overseers, to feed the church of Christ, which he purchased with his blood.”
(Acts 20:28 Lamsa Translation)

Seeking the Lord’s kingdom, therefore, involves entering or joining the Church Of Christ, which was purchased or redeemed by Christ with His blood. Have you found this Church? Is the church you belong to the true Church Of Christ? These are matters we should turn our attention to, more than just addressing the concerns of our daily living. 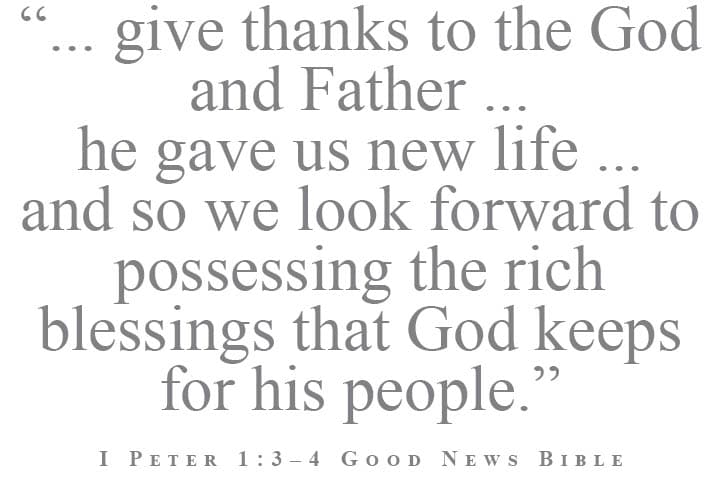 And even after one has found and joined the true Church Of Christ, his obligation to God does not end there. Remember that Christ commanded us to seek first not only His kingdom but also His righteousness. Thus, we must “plant righteousness” (Hos. 10:12 GNB) by living according to the gospel of Christ, which is the righteousness and the power of God for salvation (Rom. 1:16-17). Leading a life of obedience, holiness, and submission to God’s will is a responsibility of the redeemed, which comes with their having shared in Christ’s sacrificial death:

“We were therefore buried with him through baptism into death in order that, just as Christ was raised from the dead through the glory of the Father, we too may live a new life.  If we have been united with him like this in his death, we will certainly also be united with him in his resurrection.  For we know that our old self was crucified with him so that the body of sin might be done away with, that we should no longer be slaves to sin.”
(Rom. 6:4-6 NIV)

Dealing with life’s many problems is hard enough; how much more could it be for one who strives to live righteously in a world full of wickedness? But, for the true members of the Church Of Christ who put their relationship with God above all things, no burden is too heavy as to bring them down—no trouble too difficult for them to surrender or lose hope. As Apostle Paul confidently said:

“For this reason we never become discouraged. Even though our physical being is gradually decaying, yet our spiritual being is renewed day after day. And this small and temporary trouble we suffer will bring us a tremendous and eternal glory, much greater than the trouble.” (II Cor. 4:16-17 GNB)

Now is the time!

Reflecting on these truths from the Bible, do you think you have measured up to these ideals? Have you sought and found the Lord’s kingdom—the true Church that Christ redeemed with His blood? And if so, have you been leading a righteous way of life, obeying all of God’s commandments?

Lose out no more on what is far more important. Take the chance that God is giving all of us. Start re-assessing your priorities and seek out the things that will bring you the salvation of your soul. And there is no better time to do this than now:

“In the Scriptures God says, ’When the time came, I listened to you, and when you needed help, I came to save you.’ That time has come. This is the day for you to be saved.” (II Cor. 6:2 Contemporary English Version)