The Iglesia Ni Cristo was preached by Brother Felix Y. Manalo, God’s Messenger in these last days, and was registered in the Philippines on July 27, 1914.

From its first local congregation in Punta, Sta. Ana, Manila, the Church quickly spread not only throughout the metropolis but also to the neighboring provinces in Luzon and across the islands of Visayas and Mindanao.

When Brother Felix Manalo was laid to rest in April 1963, the Church had already established ecclesiastical districts in more than half of all the provinces in the country.

In 1968, the Church, led by Brother Eraño G. Manalo, the Executive Minister then, successively established the first two local congregations outside the Philippines—Honolulu, Hawaii and San Francisco, California in the USA.

Thus began the Church’s expansion in the Far West and eventually around the world.

From then up to the end of the ‘70s, the Church went on to spread throughout the continents of North America (establishing local congregations and group worship services [GWS] in other states and territories, such as New York and Guam in 1969, and Canada in 1971); Europe (the first local congregation, London [now Battersea], was established in 1972); Australia, mid-‘70s; Asia (China, by way of Hong Kong in 1974; Thailand in 1976; and Japan in 1977); and Africa (Nigeria and South Africa in 1978). By the end of the ‘80s, there were local congregations and GWS in the Scandinavian countries and their neighbors.

The first local congregation in Latin America was established in Guantanamo Bay, Cuba in 1990. Congregations were also established in world cities that are of great relevance to the history of Christianity— Rome, Italy on July 27, 1994; Jerusalem, Israel on March 31, 1996; and Athens, Greece on May 10, 1997.

At the dawn of the new millenium, the Church’s mission reached South America with the establishment of GWS in Brazil and Peru. Before Brother Eraño was laid to rest on August 31, 2009, the Church had been spreading continuously in different parts of the world.

Through the leadership of its present Executive Minister, Brother Eduardo V. Manalo, the Church continues to progress and succeed. Its membership has been constantly increasing.

Thousands of ministers and Church officers are being added worldwide. The construction and renovation of houses of worship, Church edifices, and other structures also continue, not only in the Philippines but also in other countries.

The houses of worship in Washington, DC; Barcelona, Spain; and Amsterdam, The Netherlands are just a few of those outside the Philippines that were dedicated to God in recent years, thus strengthening the Church’s presence in other countries worldwide.

On July 21, 2014, the Iglesia Ni Cristo inaugurated the Philippine Arena, currently the world’s “largest mixed-use indoor theatre.” This megastructure that sits in Ciudad de Victoria, Bocaue, Bulacan was the venue of the Church’s centennial celebration held on July 27, 2014, which was attended by millions of its members from all over the world.

The Iglesia Ni Cristo has an international membership comprising 147 racial and ethnic backgrounds.

It maintains nearly 7,000 congregations and missions grouped into more than 160 ecclesiastical districts in 157 countries and territories in the six inhabited continents of the world. 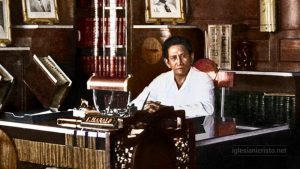